The Greatest Marine Wilderness in Africa
By Lloyd Edwards

Although we have been going to Bird Island for the last 22 years, it is only recently that we have been running regular tours to this forgotten Eastern corner of Algoa Bay. The cruises just seem to get better and we are learning some of the animal’s secrets and best places to locate them. I am usually quite conservative about how many photos I take on a cruise, but with this one there was simply no choice. Time and again these amazing scenes called for more camera action. In the end I edited 60 images and struggled like hell to narrow it down to a dozen plus one!

We headed straight to Bird Island after leaving port as the sardines have already passed and (we thought) most of the humpback whales were in East Africa. First up was a Shy Albatross, the largest of the Mollymawks. They breed on islands off New Zealand and Tasmania. After two hours of passing many penguin bait balls we anchored off Black Rocks at the SA seal colony and awaited the arrival of the stars of the show. In an hour and a half we had six great white sharks approaching the boat, close enough for Jake to record the different individuals and their distinctive markings. They ranged in size from 2,8 to 4 metres in length. They are such amazing creatures . . . definitely at the top of the fish apex predator ladder with 400 million years of evolution behind them! 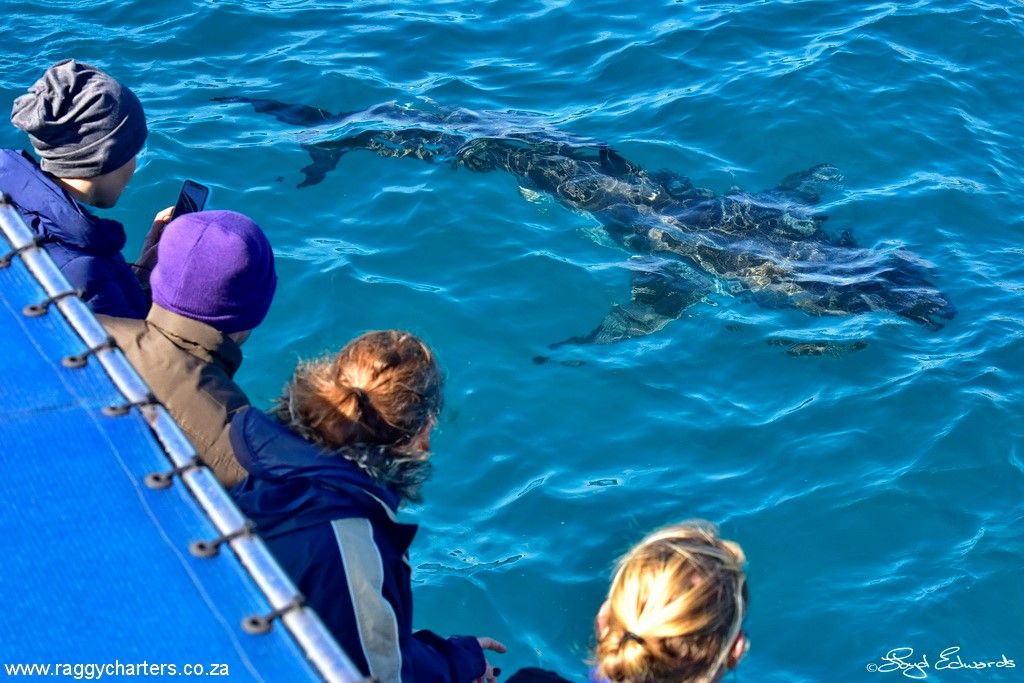 We had lunch in the Bird Island channel watching the returning Cape Gannets. They were coming in from the East in large skeins, perfectly spaced and in a tight wind resistant formation. Jake then decided to take us to the extreme Eastern end of Woody Cape. We had barely left the island when we spotted three humpback whales, which it seems could have been mating. They entertained us with tail ups, pectoral flipper slapping, spy hopping and big blows often associated with mating. They were so unperturbed with our presence that we were able to snap away in a totally relaxed fashion. It is a great recipe for a steady hand and sharp and well composed images. As always Jake maneuvered the boat perfectly to get the known landmarks as background . . . otherwise the photo could have been taken anywhere. 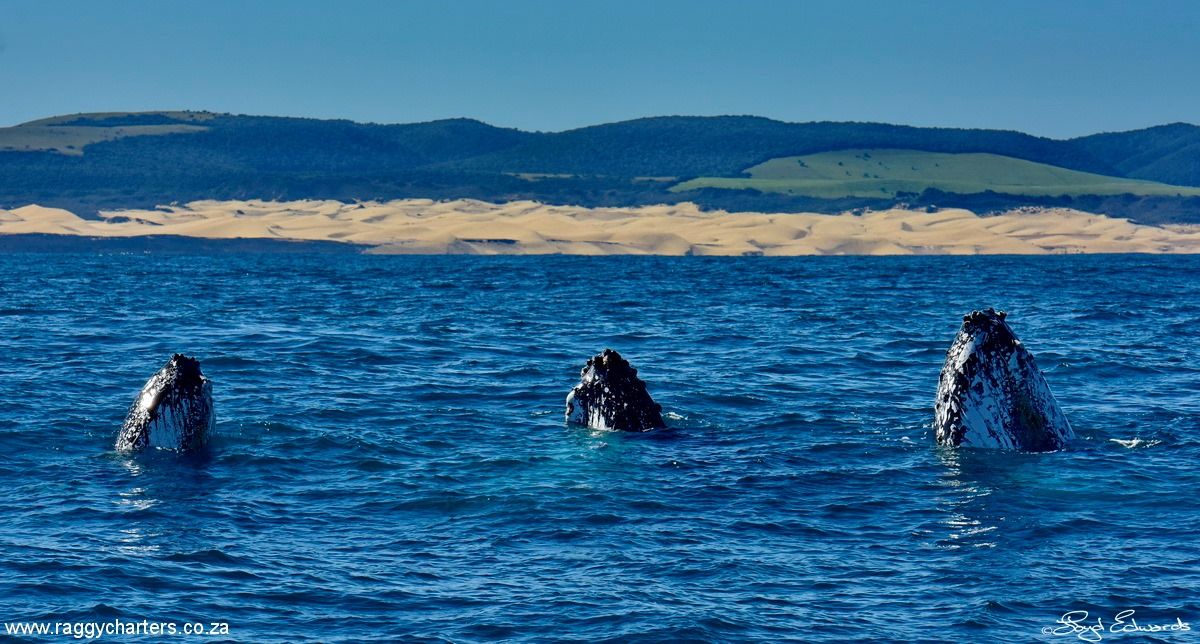 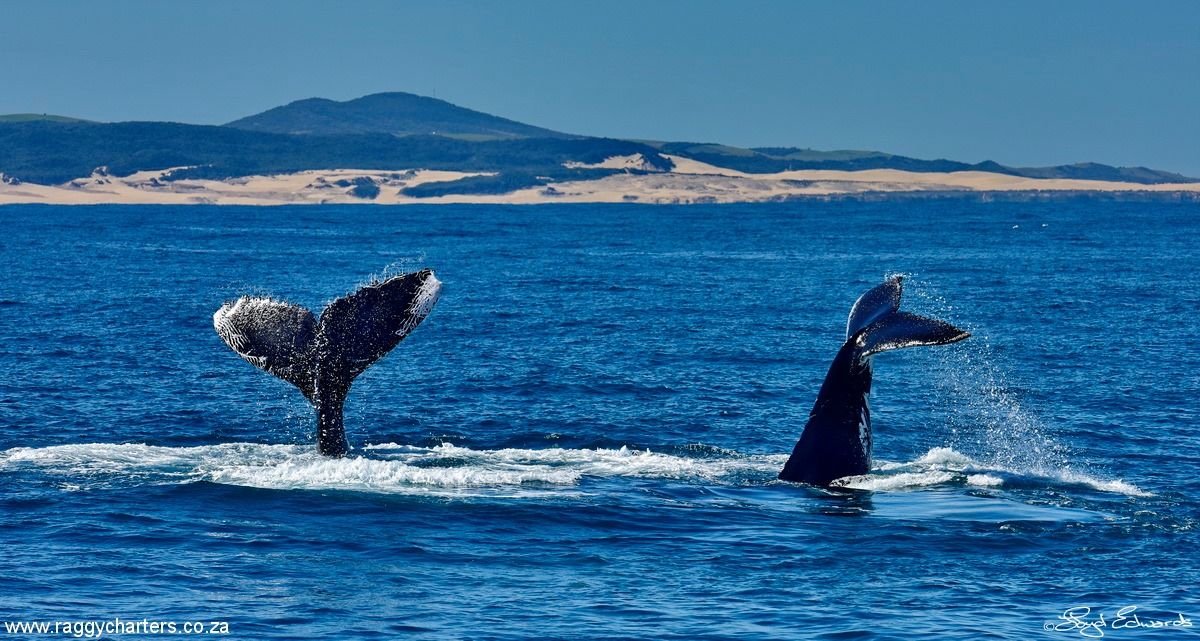 We then hit the Eastern end of Woody Cape and at once came across a penguin bait ball that also consisted of hundreds of Cape cormorants, Cape gannets, various tern species and kelp gulls. They were probably feeding on juvenile anchovies. While still enjoying this action a school of around 200 Indo-Pacific bottlenose dolphins came in from the East. There was a moderate swell running and the dolphins were in no rush. We managed to get some really awesome backdrops to the surfing animals. No large dunes this time, but some very interesting shapes in the aelonite rock. Have a look at the coastal thicket and coastal forest atop the cliffs. It is so impenetrable and species rich and almost unknown to most people who work and live along the shores of Algoa Bay. 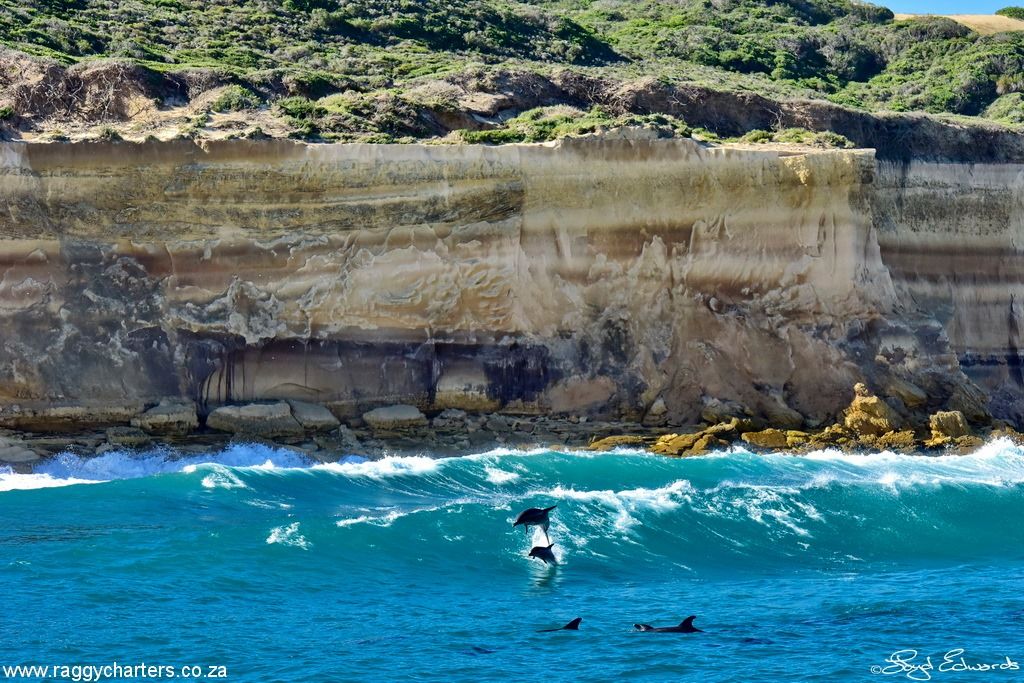 How incredibly lucky we are to have had the area declared part of the Addo Marine Protected Area! We need to be vigilant however and make sure the demersal shark long liners get more regulated and the ship to ship bunkering on the very borders of this amazing area are forced to do an Environmental Impact Assessment like they should have done in the first place. Watch our Facebook page and Website for our new campaign in this regard.

The Greatest Marine Wilderness in Africa