Algoa Bay is the Bottlenose Dolphin Capital of the World

On 18th April 2016 Algoa Bay was declared as the Bottlenose Dolphin Capital of the World. The launch was held at the Algoa Bay Yacht Club by Raggy Charters and Nelson Mandela Bay Tourism, with over 270 people attending.

Scientific evidence in support of the Bottlenose Dolphin Capital

Scientific research conducted in the 1990s by leading South African cetacean scientist, Dr Vic Cockcroft from the Centre for Dolphin Studies, revealed that approximately 20 000 Indo-Pacific Bottlenose Dolphins Tursiops aduncus, were making use of Algoa Bay. In a recent study of the population of Indo-Pacific bottlenose dolphins in Algoa Bay, Ryan Reisinger and Leszek Karczmarski* used a photographic data set of over 10 000 ID-images, which enabled them to accurately identify 1 569 individual dolphins by distinctive markings, such as deep notches, on the edges of their dorsal fins. Subsequently, photo-identification data collected on 54 occasions during a 3-yr-study period could be used in a ‘mark-recapture’ statistical analysis (without, you will note, having had to touch a dolphin to be marked or recaptured!). This estimated a population of 28 482 individuals. Ryan and Leszek concluded this was the: “LARGEST POPULATION ESTIMATE TO DATE FOR THIS SPECIES ALONG THE SOUTH AFRICAN COAST, suggesting that the bottlenose dolphins inhabiting the Algoa Bay region represent part of a substantially larger population that ranges along a considerable length of the South African coast” (Reisinger & Karczmarski, 2010; emphasis by capitalisation is ours).Raggy Charters has been running marine eco tours in Algoa Bay since 1997. Over the years, we have observed schools of between 50 and 600 Bottlenose Dolphins individuals on about 90% of our marine cruises.

Lloyd Edwards from Raggy Charters attended the World Whale Conference in the Azores Islands held during October 2015. The delegates to the conference consisted of whale and dolphin watching operators, cetacean scientists and marine non-government organisations from around the globe. When Lloyd gave his three presentations at the conference, all of the more than 200 delegates were amazed to see the size of the Bottlenose Dolphin schools frequently spotted in the bay: nowhere else in the world are such large schools seen. He asked delegates for support for launching Algoa Bay, Port Elizabeth, as the Bottlenose Dolphin Capital of the World and the response was overwhelmingly positive. Since then he has been elected to the Global Council to represent WCA partners in Africa.

THE PEOPLE OF PORT ELIZABETH

The Port Elizabeth locals have always had a close relationship with bottlenose dolphins. As children in our school groups, we used to so look forward to our Bayworld visit and the captive dolphin show. The dolphins in captivity have now gone, and it is highly unlikely that we will ever have them back. It is much more ethical and sustainable to enjoy dolphins in their natural environment. What a fantastic opportunity to promote wild dolphin watching, both from the shore at raised vantage points and during marine cruises.In January 2016 the Raggy Charters Facebook article and photos of dolphins along the beachfront were seen by more than 64 000 people and shared by close to 700! The people of PE just love “their” dolphins!

Bottlenose dolphins are appealing to people worldwide. The permanent smiles on their faces and the interactions they have with people make them a hot favourite. We have witnessed passengers on our cruises getting so excited when dolphins are spotted, that we literally have to really drag them away from our close encounters when the allotted time as per our permit has expired. The success of films like “Flipper” has no doubt contributed to this appeal. Also, the number one thing on people’s bucket list worldwide is the swimming with dolphins experience. While we do not promote this activity in South Africa, because it is illegal (for good scientific reasons), it shows the popularity of dolphins and the close relationships that people have with them; even greater than with another Port Elizabeth favourite, African penguins. By coincidence, Algoa Bay is also home to the largest colonies of African Penguins in the world, also around 30 000.

Algoa Bay as the Bottlenose Capital of the World will be celebrated with an annual Dolphin Festival. The Whale and Oyster festivals of Hermanus and Knysna respectively have gained local and international popularity and are of much economic benefit to the communities there. The Dolphin Festival will certainly bring delight to local residents, as well as visitors, and attract further national and international attention to Port Elizabeth. 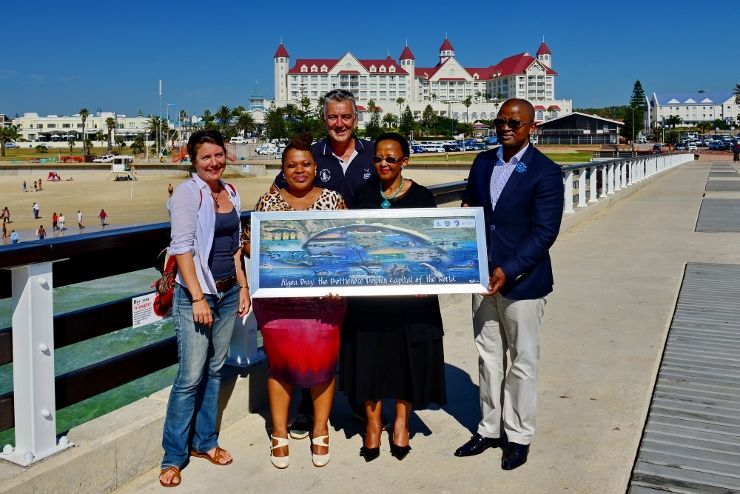