Another Whale Calf in Algoa Bay
By Lloyd Edwards

On Saturday morning we left the port with Guy Cloete aboard, who had won a free cruise with us for naming the first born Southern Right whale in Algoa Bay. The search for “Onenzi” was underway. About two nautical miles from the harbour we came across three adult humpback whales. They looked like males on the hunt for females. Going nowhere in particular but at a good speed!

After our allocated 20 minutes we headed inshore towards the new port at Coega. As we approached our guide Purity started banging her foot on the roof of the lookout platform. Judging by the speed at which she was banging away, she must have seen something quite large. Indeed it was a huge Southern Right adult but without a calf. My guess is that it is another female looking for a sheltered place to give birth.

We carried on towards St Croix Island when we saw another two blows next to one another. Then we saw them, a mother and newly born Bryde’s whale calf! This is only about my fifth Bryde’s calf that I have seen during the past 24 years with Raggy Charters. The calf was really energetic, swimming ahead, behind and next to the mother. The calf would take at least five breaths to every one of the cow.

Unlike the migratory whales, Bryde’s whales are present along our coast throughout the year. They do seasonal migrations up and down the coast between False Bay and Durban. They are extremely fast moving and manage to hunt down bait fish, often with the assistance of Long-beaked common dolphins and African penguins. Bait fish feed on plankton and include sardines, anchovies, horse mackerel and saury. Bryde’s whales can be confused with Minke and Sei whales but are the only rorquals with three longitudinal ridges on the head. See if you can make them out in the below photos.

Bryde’s whales do not have a specific breeding season so births can take place at any time of the year. Like the migratory whales their gestation period is between 11 and 12 months. They are born at between 3,4 and 4 metres in length, just like the humpback whales but only weigh up to a ton while the humpbacks can be two tons. They are weaned at six months of age. Please take a look at  for more information on Bryde’s whales.

We had Cara-Lee and her mother Thea looking out for whales atop one of the sand dunes at Sunday’s River Mouth. They spotted two sets of blows away in the distance, one which could have belonged to “Onenzi”. As we had already seen our quota of whales we instead opted to spend time with the African penguins and Bottlenose dolphins at St Croix Island. We will try and find the pair again next cruise.

In the meantime can anyone think of a name for this latest edition to the bay? As with last time, we will be offering the chance to win another whale watching cruise with the Raggy Charters team.

Bryde's calf in the foreground with its mother. While the full length of the calf is shown, most of the cow is below the water.

A Bryde's calf in front of its mother. The strongly sickle shape dorsal fins are a good identification feature. 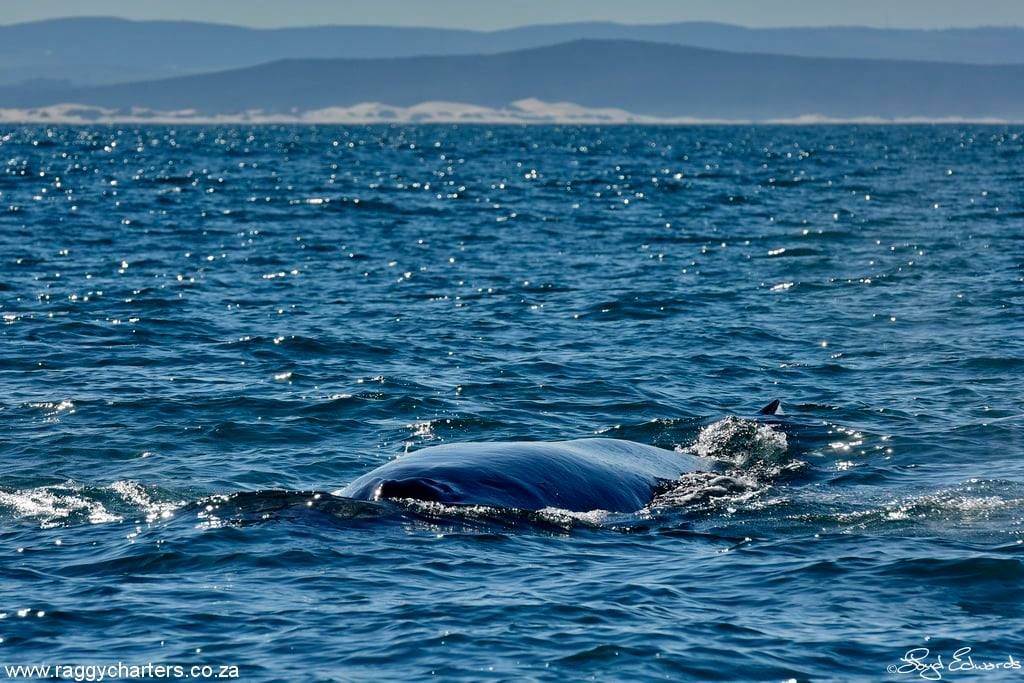 The Bryde's whale cow bears down on our catamaran "My China". The splash guards of the blowholes are just above the water and the dorsal fin has started to break the surface 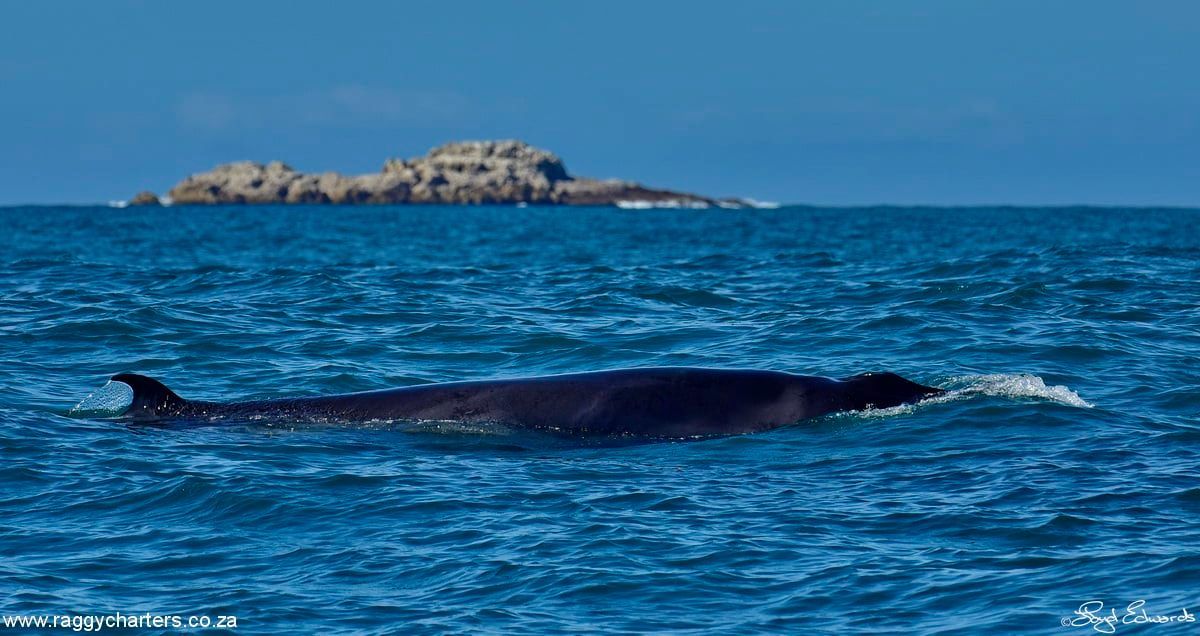 The Bryde's calf showing both the sickle shaped dorsal fin and the blowhole. Birth marks can be seen on the flanks which aid in identification of individuals. 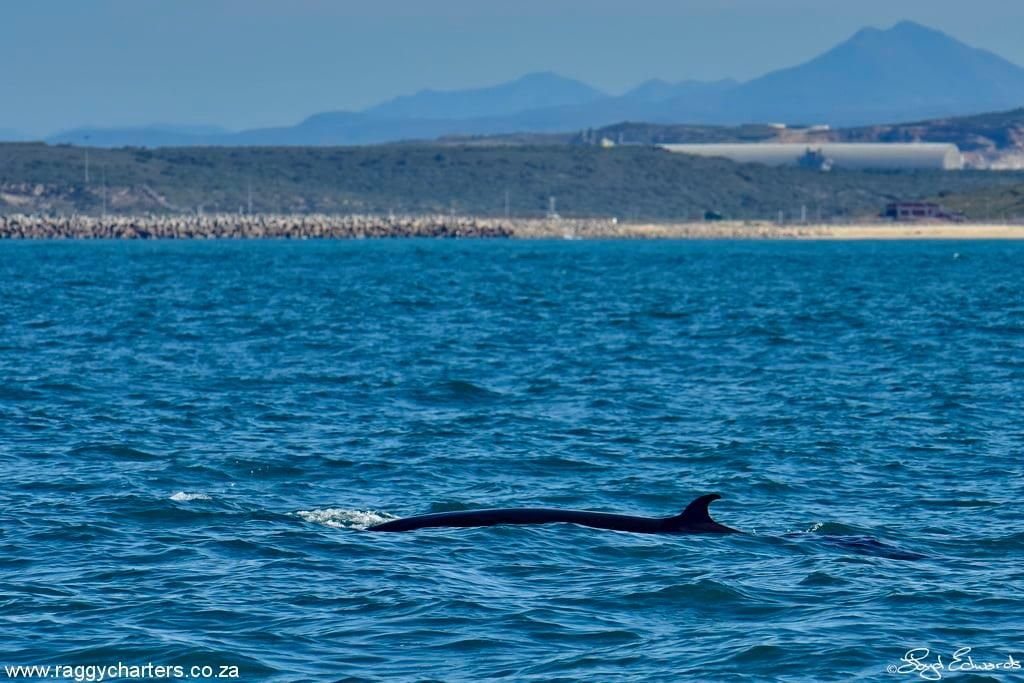 The Bryde's whale calf heads towards shallow water. The Eastern side of the Coega Port breakwater can be seen as well as the Winterhoek Mountains. 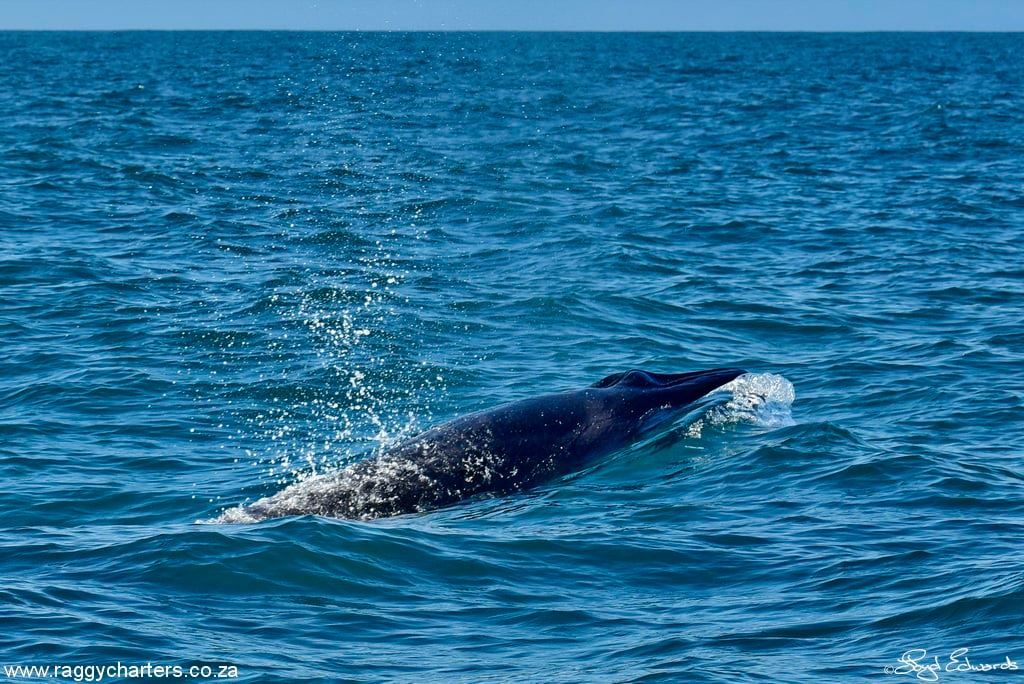 The Bryde's whale calf showing the three longitudinal ridges on the head . . . well if you have a bit of an imagination! 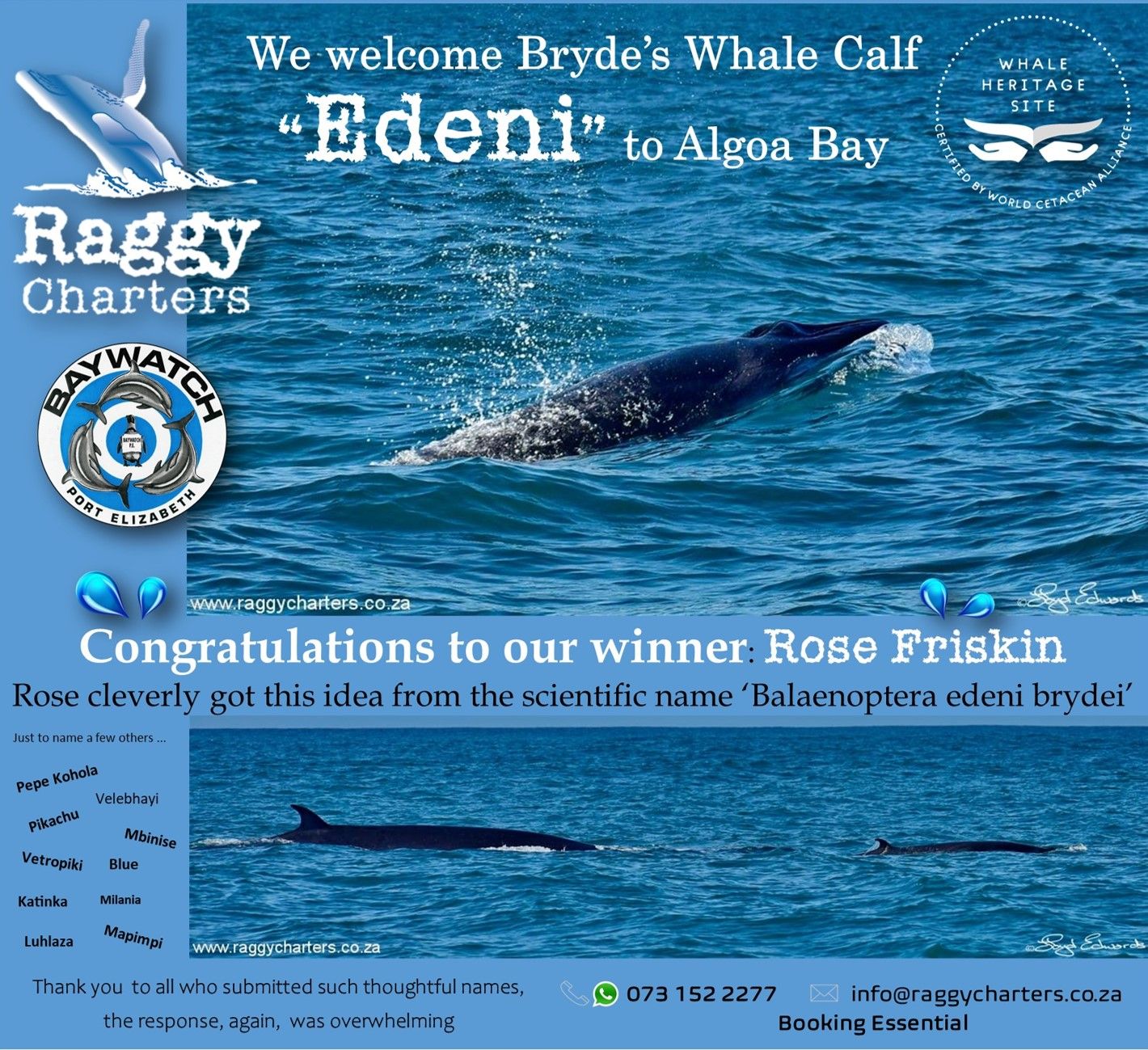