Killer Whale Family in the Bay

A fishing boat spotted this family of killer whales off the mouth of the Sunday's River this morning. To me it looked like an adult female, a sub-adult male, three other juveniles and a calf. The one had what looked like a piece of dolphin in its mouth. We have observed them hunting and killing Indo-Pacific dolphins in this area before.

The last time we saw killer whales in Algoa Bay was with the BBC in April this year. They were here filming a new series called "Perfect Planet". Killer whales are known to occur in Algoa Bay at any time of the year, so this sighting is not unusual. While people seem to think that killer whale sightings are becoming more frequent, I think that due to social media and mobile phones with cameras, every single sighting now gets made public.

We apologise for some of the language used on the video, but you can imagine how excited everyone became when the killer whales approached the boat! 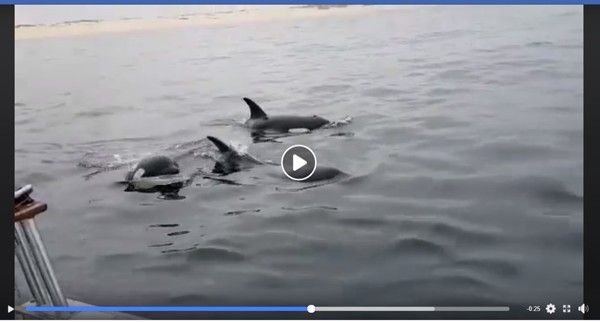