The only downside to this sighting was that the killer whales were first observed slap bang in the middle of where ship to ship bunkering takes place in Algoa Bay. Please watch this page for an update on our latest action to fight this unacceptable state of affairs. We are busy with a legal action.

It is not often that we see killer whales in Algoa Bay, so you can imagine how excited we were to see 12 of them yesterday! Initially we saw two males with their tall dorsal fins breaking the surface. As we looked around our catamaran “My Bru”, they started popping up all over the bay. We followed them around and watched all kinds of interesting behaviour as can be seen in the photos. They eventually came together as a group just off Cape Recife before leaving Algoa Bay. The pod was made up of at least 4 males, 2 calves and 6 females.

In Algoa Bay we get the Type A transient variety which is also the largest. There are another 3 types in the Southern Ocean, namely type B, C and D. Most killer whale forms around the planet are transient, which means they move around in no set pattern. Their group size is smaller (1 to 7), target mammals, dive for five to 15 minutes and vocalize less frequently. The other grouping, the residents, obviously has much shorter home ranges, target fish, dive for four minutes and vocalize frequently. Studies conducted off Washington and British Columbia revealed that these populations had the most stable groupings of non-human mammals. From birth they spend their entire lives in these matriarch dominated societies. Killer whales are the second most widely distributed vertebrate on the planet after humans. Although they do venture into the tropics, they are more common in near shore and high latitude habitats where the seas are more productive.

Our A type transient form exhibits high sexual dimorphism. The most striking feature is the male’s triangular dorsal fin which can attain 1,78m and slopes forward in some cases. The females can only reach a metre and is dolphin like (falcate) in shape. Calves of both sexes have dorsal fins like the females. Males further differ by having rounder and much larger pectoral fins, up to 2 metres in length. They also have a much larger tail. Individuals are identified by their fins, white eye patches and the saddle on the back behind the dorsal fin. Animals examined on whaling boats operating out of Donkergat and Durban had the greatest length for males as 8,8m and for females 7,9 m.

Group size in our area is between 1 and 12 individuals with an average of 4 or 5. Calves are often seen in the groups who have an adult male, adult females and sub adults of both sexes. The females stay with the pod until maturity, when they may leave and form bonds with several other pods. If she became reproductive, she will more likely stay with the new pod. If not, she may return to her natal one. It is a little different with the males. The first-born stays with the pod and becomes mommies big baby boy! Later born will leave at maturity and may become solitary animals. In all our years we have only observed three lone males. If the group lacks a male, he may join them. Occasionally groups may join up which will present opportunities for mating and learning new skills. Social behaviour and culture could also be enhanced. 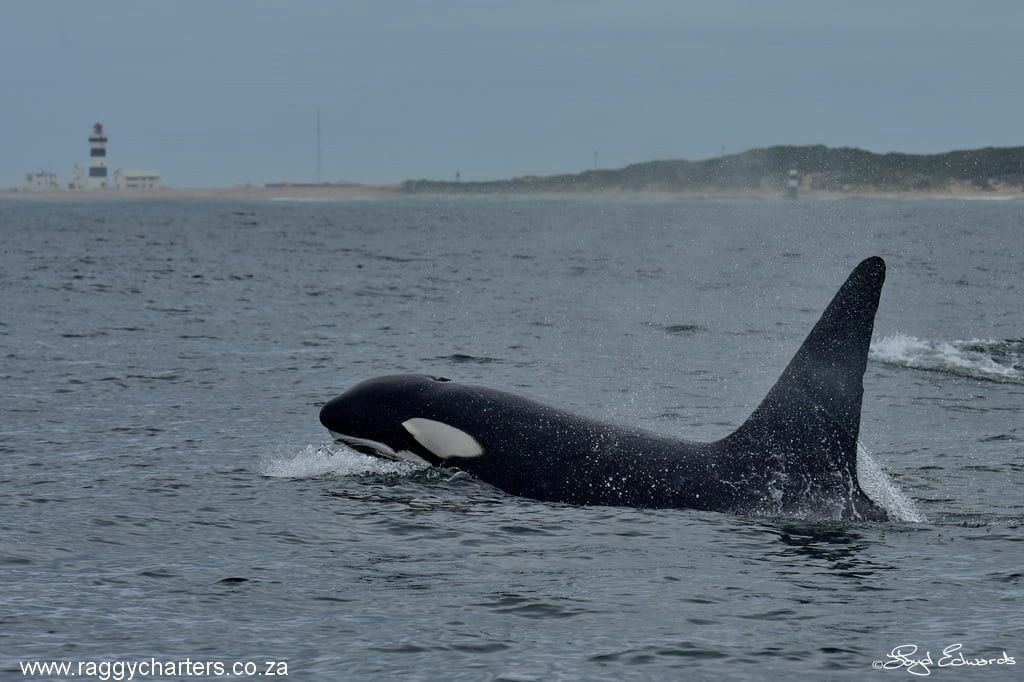 Image taken with a Nikon D810 full frame, ISO 220, 150mm zoom, f/8 and 1/1250th second. This large male has a notch half way up his dorsal fin and is well known along the South African coast. Cape Recife lighthouse is in the background. The light was not the best with overcast conditions. 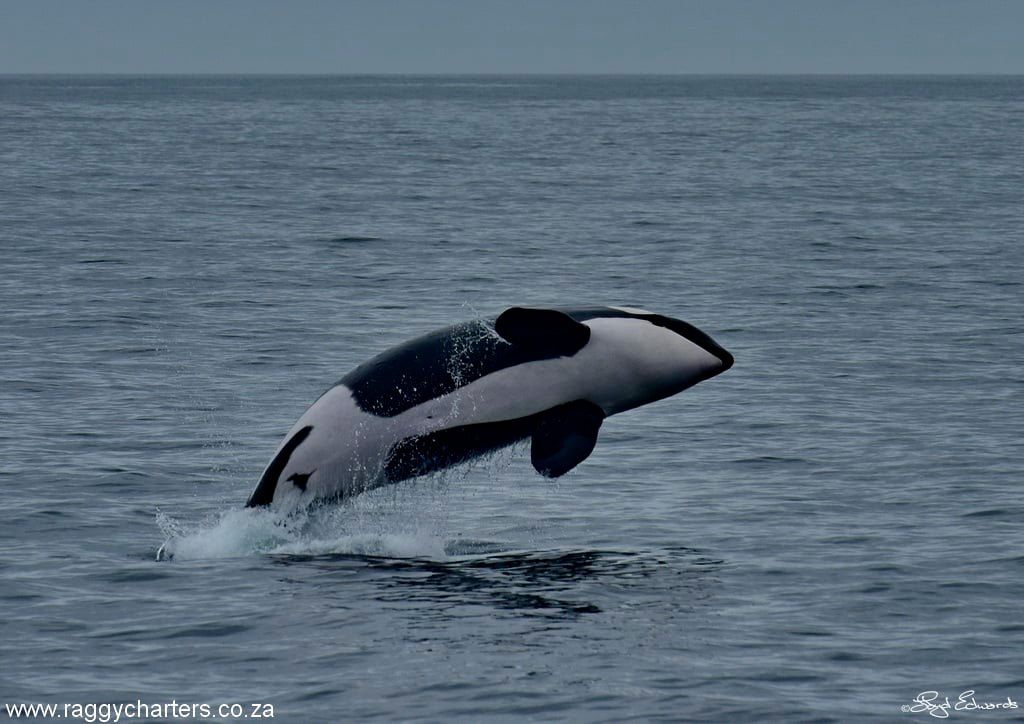 A female killer whale breaches in Algoa Bay. A female cetacean has the genital slit and anus openings closer together than males. The mammary gland slits are also visible. 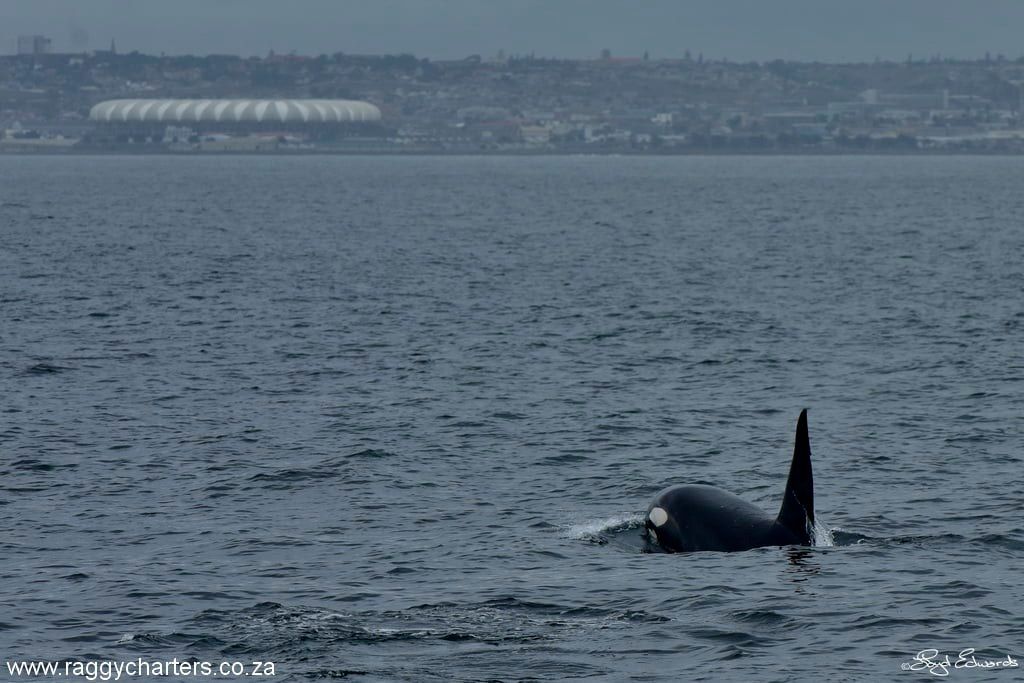 This male swims towards the Nelson Mandela Bay rugby stadium. 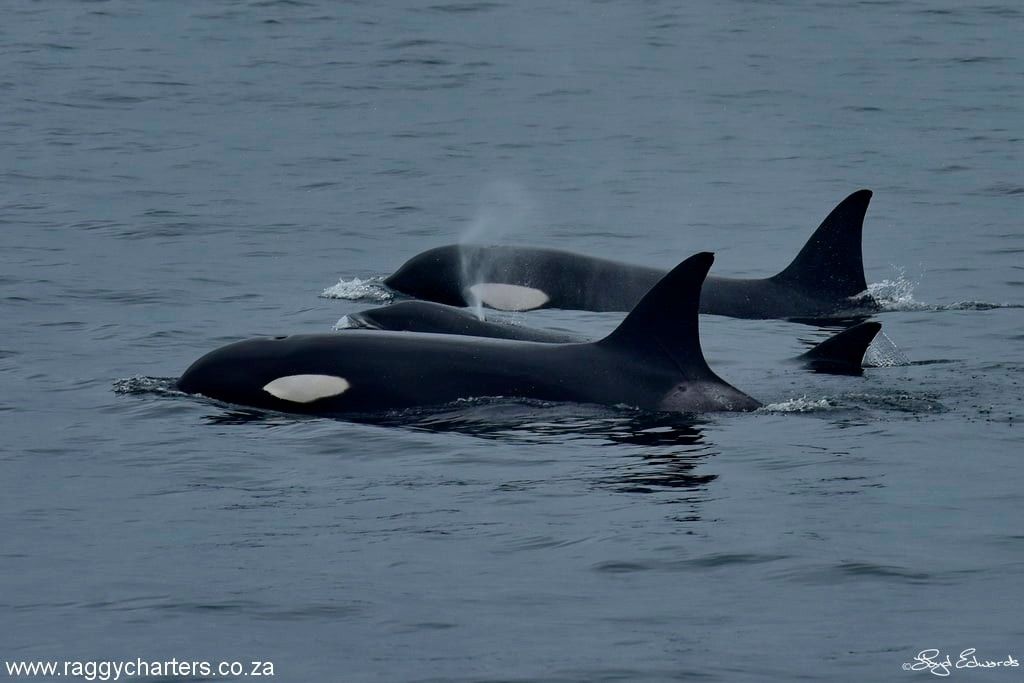 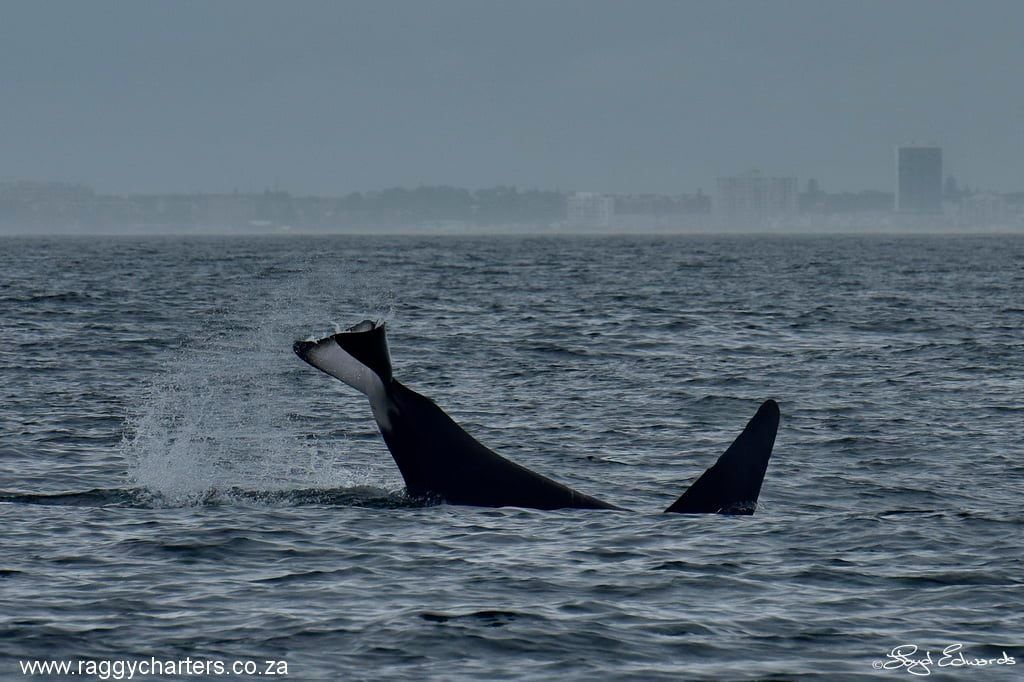 A male killer whale slaps his large tail on the surface. Could this be a warning to us to keep our distance? 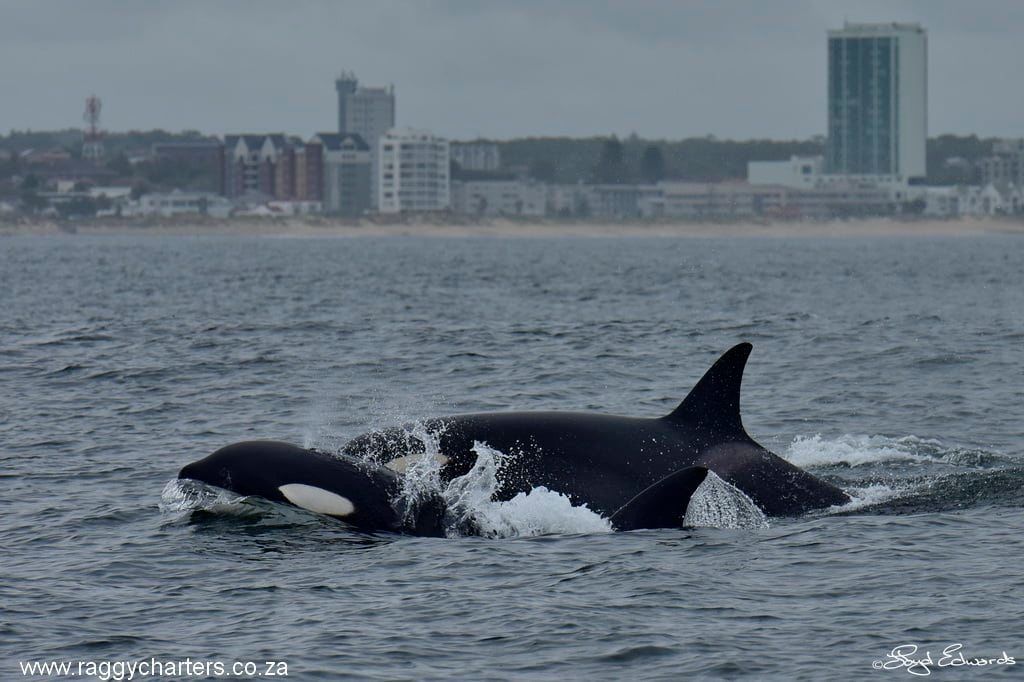 A female and calf cruise along the Port Elizabeth Beachfront.