What a great sighting we had this week of two species of migratory whales, both sporting newborn calves! Add this to a recent sighting of our partially resident Bryde’s whale, also with a newborn, we realise how incredibly blessed we are to have such a beautiful bay. All we need to do is sort out the Ship to Ship fuel transfer fiasco and everyone will be happy!

We headed off in our catamaran “My China”, filled to capacity with mostly International Tourists. Our part time skipper “Professor” Warren Tarboton, who is now completing his commercial helicopter license, had seen some Southern Right whale activity from the air between St Croix Island and Hougham Park. We headed to the area and very soon we spotted the cow/calf pair. Judging from past sightings, the calf was born recently. The reason the pair stay close to shore in our protected bay is so the calf exerts itself less during swimming and grows faster. The pair whisper to each other and with the sound of the waves drowning this out even more, they hopefully escape detection by killer whales. While the mother is quite capable of defending herself, the calf will not always be so lucky. The calves should remain in Algoa Bay for around 80 days until they reach the critical length of 8 metres. This would make them strong enough to undertake the 4000km swim back to their feeding grounds in the Southern Ocean.

Next up was another migratory species, the Humpback whale, also with a new-borne calf in tow. This was a very recent birth as both the dorsal fin and tail flukes on the calf were bent over. This is to make the birth easier on the cow. It was light in colour and had very few scars, which we presume are caused by barnacles attached to it’s mother. Although calves are sometimes born in July, the peak is in August. While most birthing takes place off East Africa, we have seen newborns here before. The chances increase as one gets closer to the Wild Coast and KZN. While conventional wisdom states that calves need to be born in the warmer tropical waters as they do not have the insulating blubber layer like the adults, other factors maybe at play. Killer whales are known to prey on calves and juveniles, so swimming all the way to the tropics where killer whales are much less abundant may decrease the chance of predation.

Add three sightings of Indo-Pacific dolphin schools of 50, 200 and 300, some South African fur seals sunning themselves, what is left of the African penguins and some Cape gannets diving, the guests were all totally enthralled! 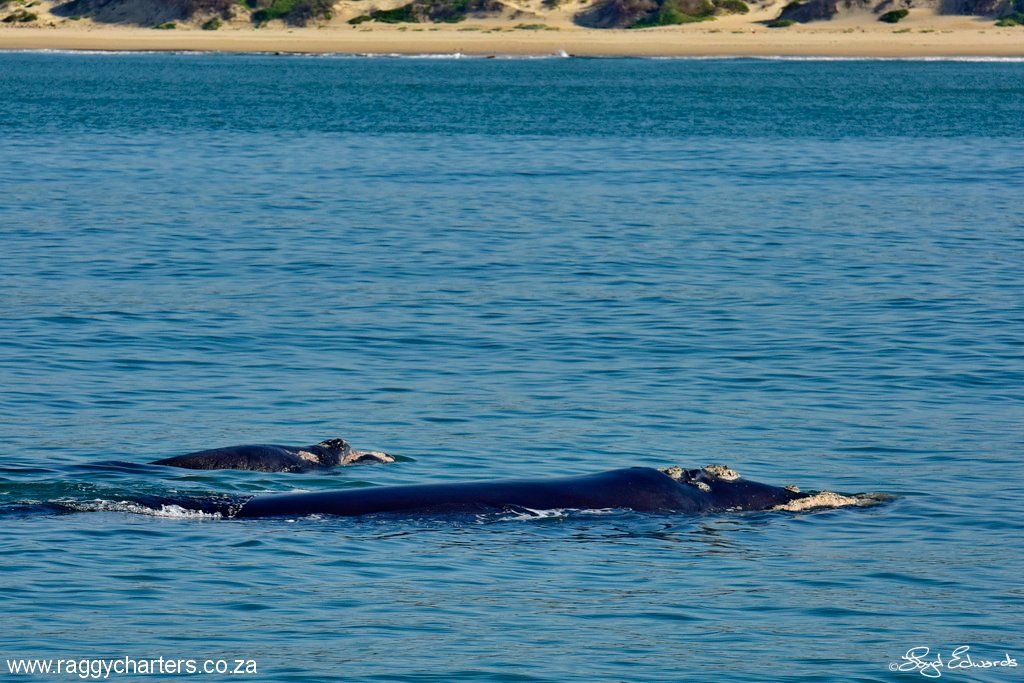 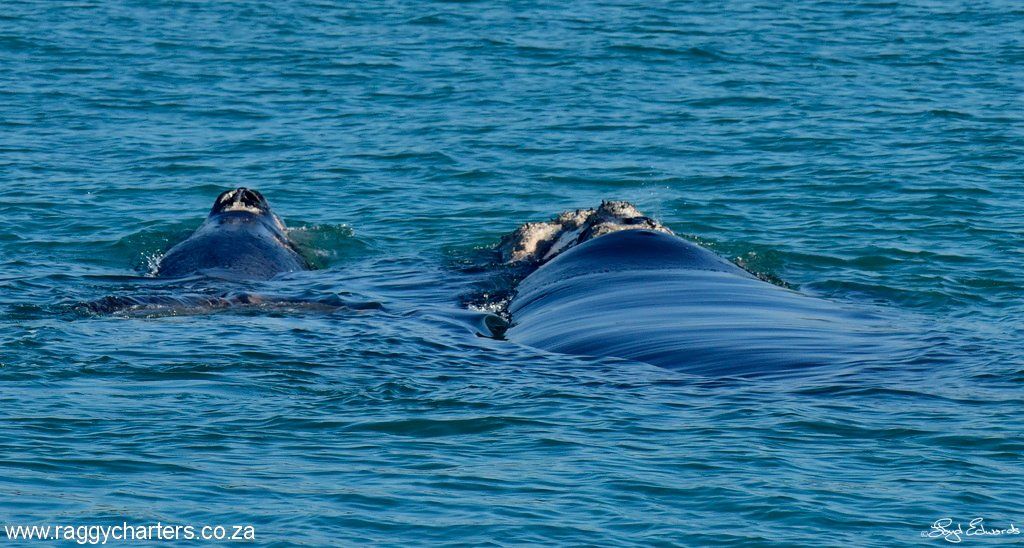 See the double blowholes of the calf wide open. All baleen whales have two blowholes, toothed whales only one.

The calf is already starting to get callosities on it's head and lower jaw. These warty like protuberances host barnacles and whale lice which are transferred from the mother. 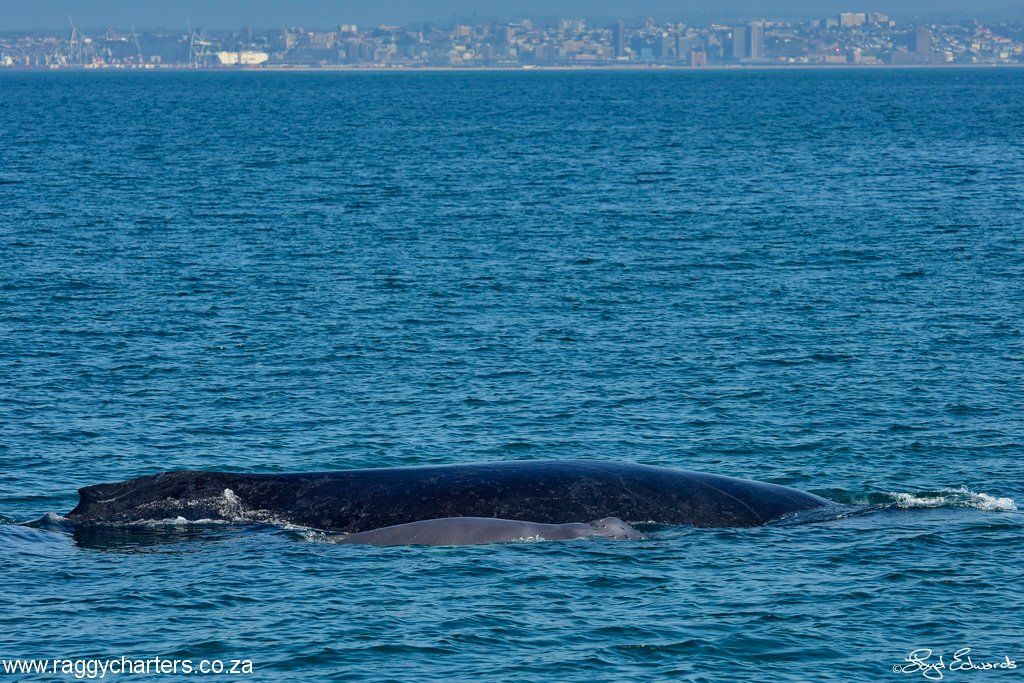 A Humpback cow with her calf firmly tucked up against her flank swims slowly past the PE Harbour and North End.

Note how the calf's dorsal fine is still bent over in comparison to it's mother.

Tubercles can be clearly seen on the calves head. They each contain a hair at the centre and are thought to assist in feeding. 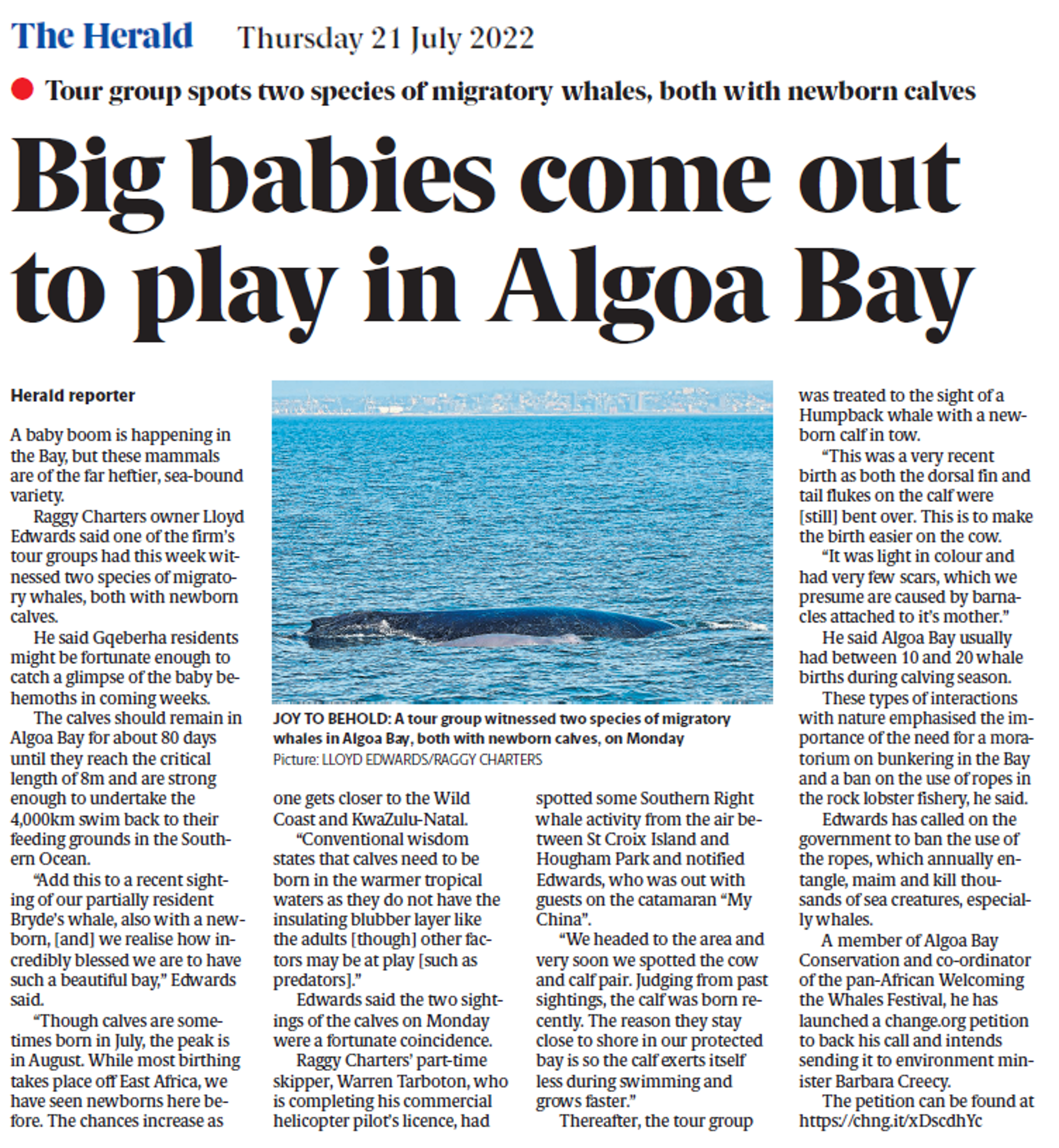