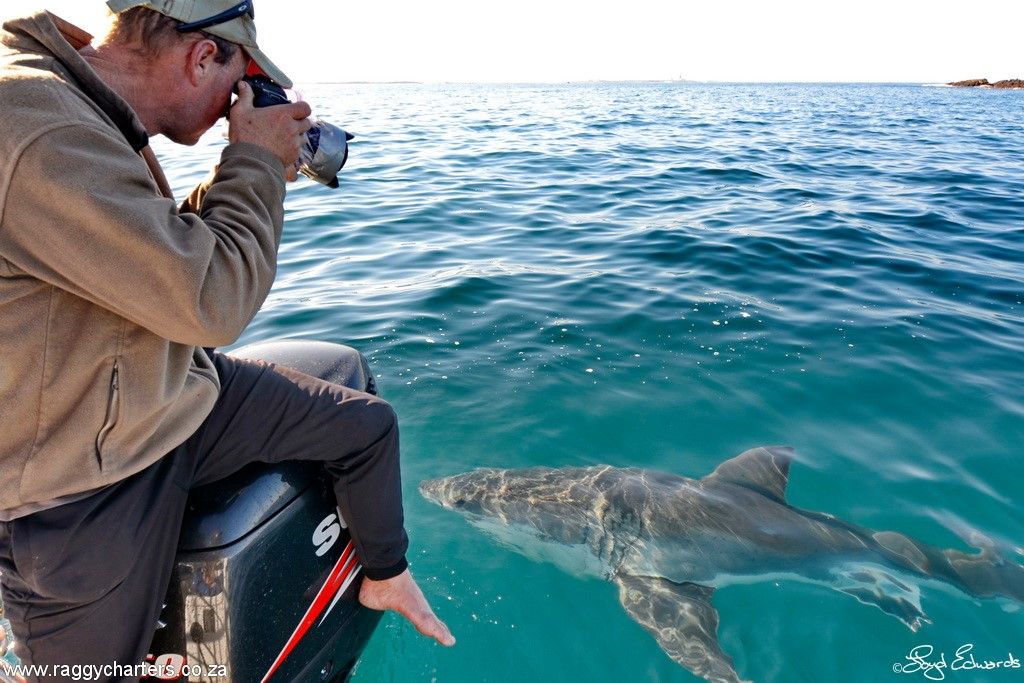 So while the white sharks are missing from False Bay, with only one sighting in the last two years, this is not the case for Algoa Bay and especially Black Rocks near Bird Island. According to the shark spotters in False Bay, the normal annual sightings of white sharks were in excess of 200. This year only one has been seen and last year none. The cage diving operators in False Bay and Gansbaai have also had no sightings. While the two killer whales, “Port and Starboard” have been responsible for some fatalities, as carcasses have been washed up without their livers, they are only part of the reason. Demersal shark long liners that target smooth hound and soupfin sharks are probably the main reason. This industry has been making headlines for all the wrong reasons of late and public pressure has forced the minister to appoint a panel of experts to investigate the industry. While our white sharks go hungry due to the lack of small sharks which make up 60% of their diet, fast food outlets in Australia are selling them as “flake and chips” which ends up getting flushed down Australian “dunnies” (toilets)! They are quite happy to safely guard and protect their own sharks, while allowing our resources to be pushed to the point of collapse.

The white shark viewing industry used to provide hundreds of jobs in the tourism industry which is vital for the economy. Now we have the demersal shark long lining industry making a quick buck out of decimating our shark populations. At present it is mainly the white shark operators who are leading the campaign to put restrictions on the fishermen. We know how important sharks are to the marine ecosystem and continue to educate people about this, using sustainable shark viewing as the means to do so. Hopefully the panel will come up with some ideas that are adhered to for a change. Then the upcoming court case of the “White Rose” that was caught fishing in the De Hoop Marine Protected Area will hopefully lead to a conviction and the withdrawal of permits.

Raggy Charters has had the rights to conduct white shark viewing at Bird Island in Algoa Bay for 3 years. After some permit issues were resolved at the Dept. Environmental Affairs, we finally received the permit last December. We have been doing research on the best ways of conducting white shark viewing in Australia, New Zealand and Mexico. We have identified a student and started a project that will investigate alternative methods of attracting sharks a little closer to the boat. They are already in numbers at Bird Island as they are there to prey on the seal pups which are learning to swim.

Last month we conducted two trials at Bird Island and saw two white sharks on the first attempt and nine on the second. The one in the attached photo is around 3m in length. During the second attempt we were very privileged to be joined by Chris and Monique Fellows who have pioneered white shark viewing in South Africa and the world. Chris was extremely helpful in sharing his knowledge of these amazing creatures that he has built up over the years. Monique helped us record the individual sharks by looking at certain characteristics and unusual markings. All the sightings are meticulously recorded so that patterns and occurrence can be deduced. With their guidance and knowledge we very soon had a totally new outlook about these fish. Although they are aggressive and dangerous predators, it was amazing to see how shy and gentle they can be. It was so interesting to observe how the bigger sharks warned the smaller ones to get out of the way by using certain body postures. One can only shamefully think how wrong the mass media has been by painting a picture of them as man killers that need to be exterminated. It totally nullifies the image of them being these ferocious killers that charge up to people and rip them to pieces. It took them a great deal of time before they would approach the boat closely. 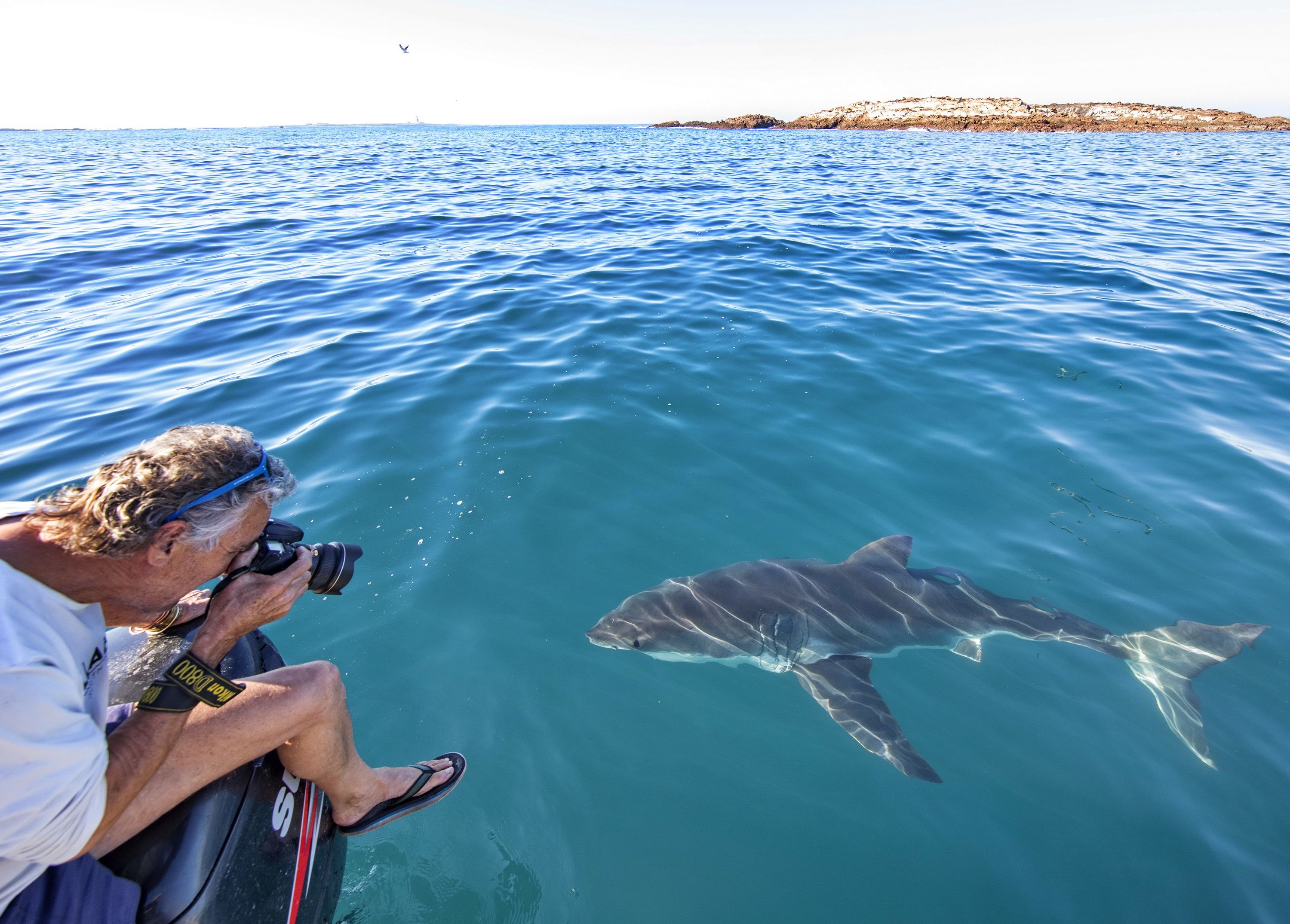 The size of the eleven white sharks we saw ranged from 2,8m up to almost 4 metres. One of them had a large fish hook embedded in its jaw. Another looked as if it had been injured by a wire trace probably caused by rolling in it after being hooked. While some scientists have put the number of white sharks in South Africa to just over 500, rock and surf anglers in Algoa Bay have been catching plenty of newborns between 1,6 and 2 metres in length. They seem full up along our beaches from late to mid-winter. It has been suggested that Algoa Bay is a nursery area for the juvenile white sharks whose numbers coincide with the increase in blue rays along our coastline. White sharks have been protected in South Africa since 1991 and while the anglers return these sharks, those caught by the long liners have their heads and fins hacked off. What is the purpose of protecting white sharks when their main food sources, smaller sharks that provide the main part of their diet are not?

Raggy Charters has decided on using a precautionary approach while setting up our white shark viewing operation. Until we have a better understanding of the sharks, we will not be offering cage diving from our vessel. At this stage we will only be viewing them from the topside. We adhere very strictly to the terms and conditions as set out in the permit. We will not tolerate any of the “adrenaline junkie” experiences offered by some unscrupulous operators here in South Africa and anywhere else in the world. Our experience will be conducted in a calm and gentle manner while the well-being of the shark is our primary consideration. Some of the funds generated from cruises, will like always, be used to protect these creatures and their prey. 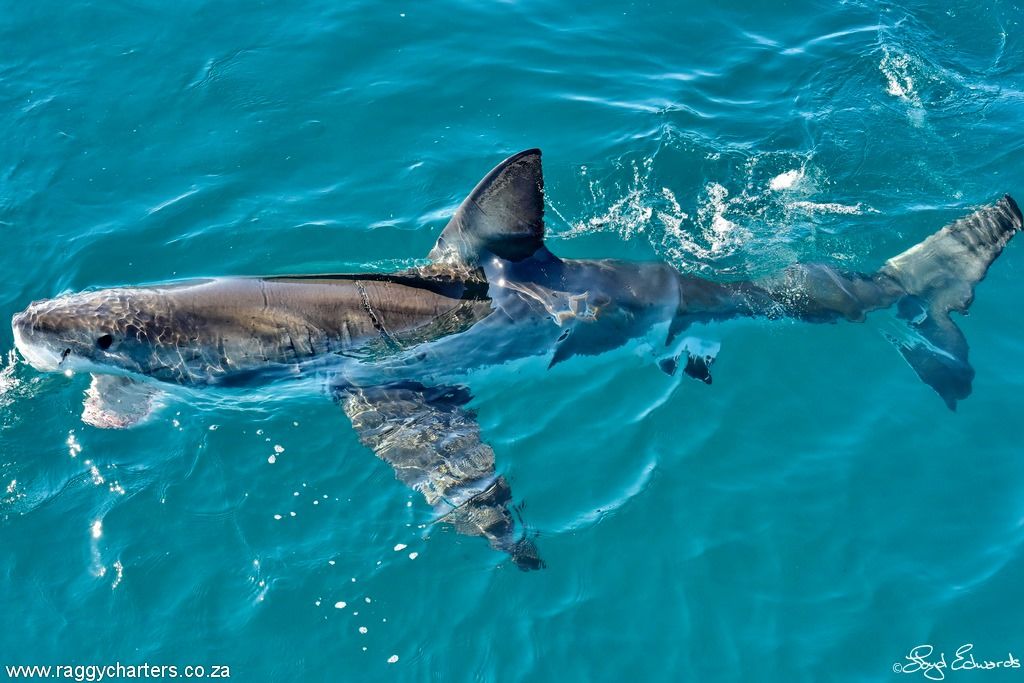 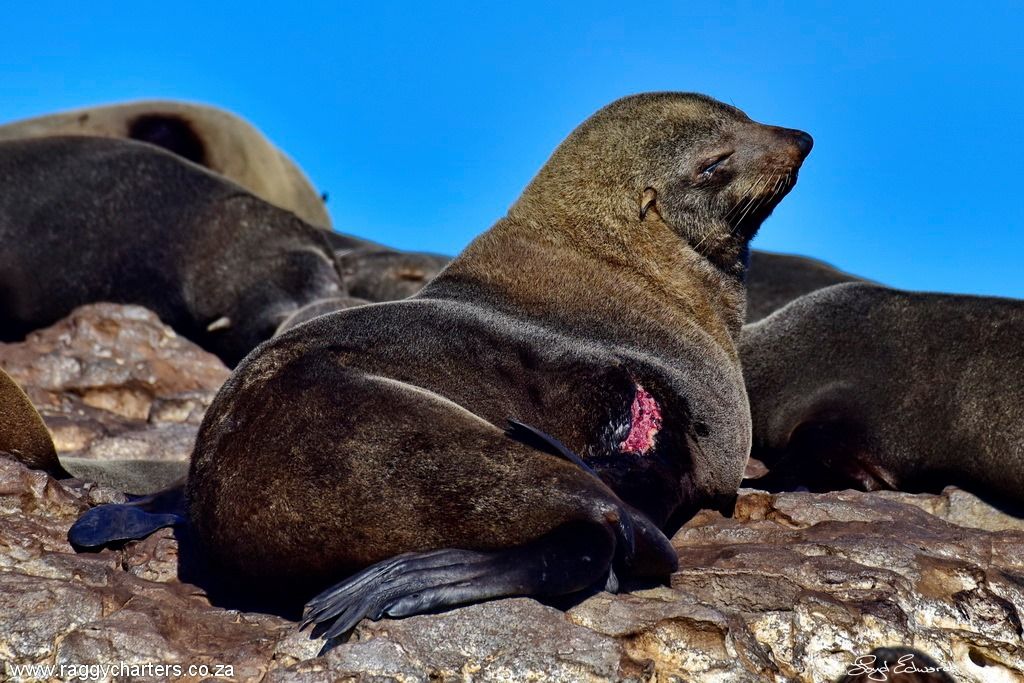 We generally cruise back along Woody Cape and the Alexandria Dunefield area after we have finished observing the white sharks at Bird Island. We have never been disappointed and almost always see Indo-Pacific bottlenose dolphins surfing the waves. They surf down the face of the waves and breach out the back just before it breaks. The results can be quite spectacular as can be seen in the below photos.

The Alexandria Dunefield is the largest mobile coastal dune system in the Southern hemisphere. It stretches all the way from Sundays River to Woody Cape. Geographically speaking the Dunefield is relatively young, a mere 6500 years. They are formed when a strong dominant south westerly wind blows across a long sandy beach. The dunes can be up to 150 metres high and move at 25 cm per year. The early Khoi used to live among the dunes and the shell middens that still exist there are testimony to this. Mussel shells and pieces of pottery can be seen scattered throughout the dunes. 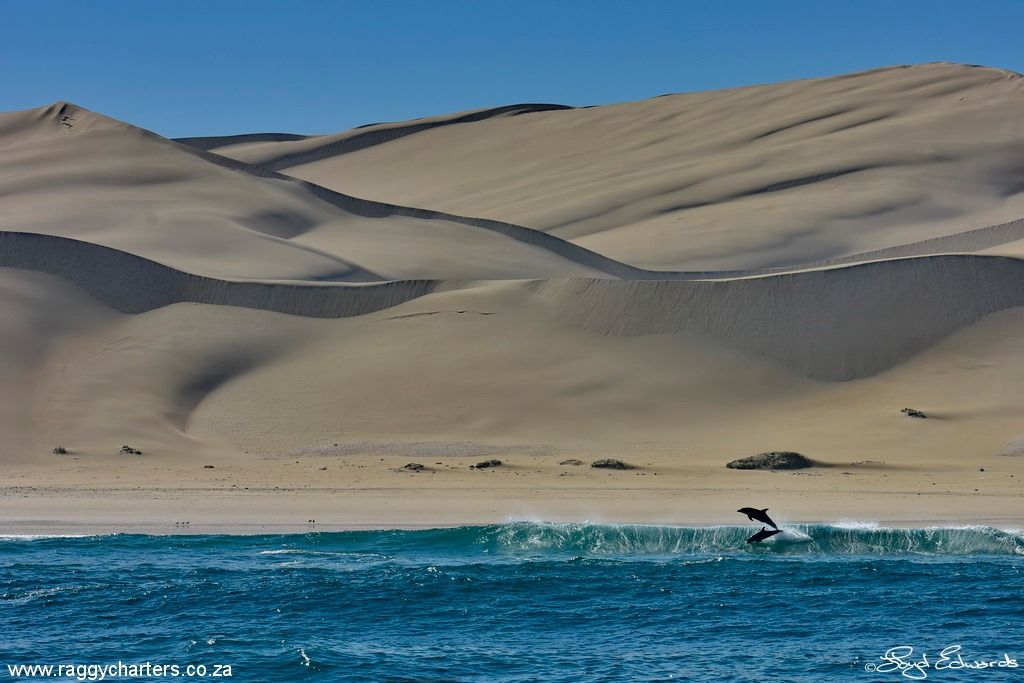 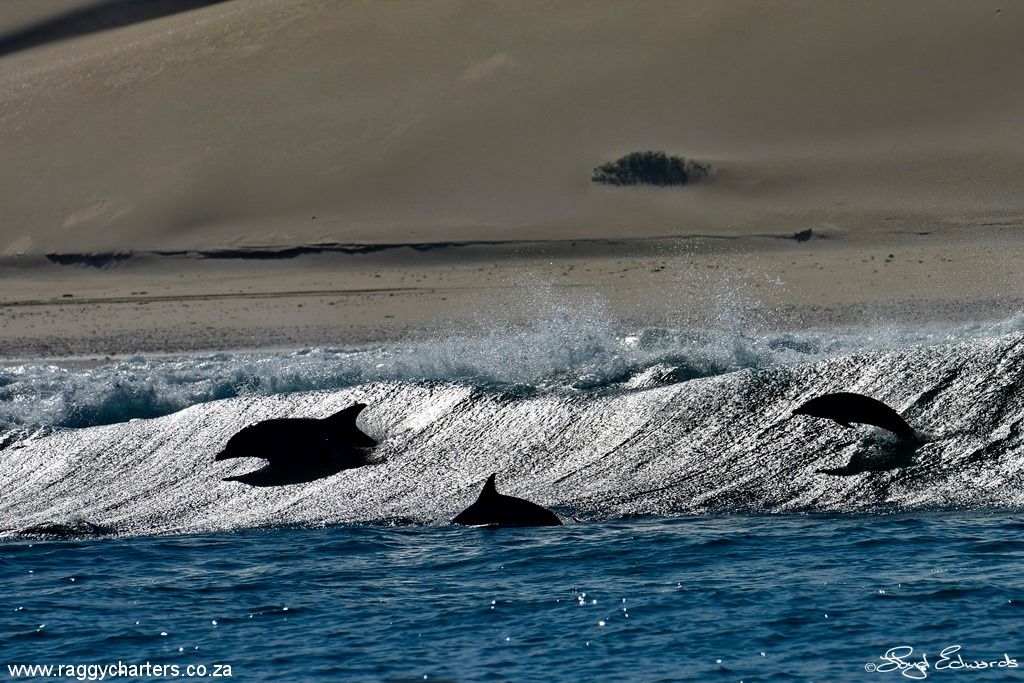 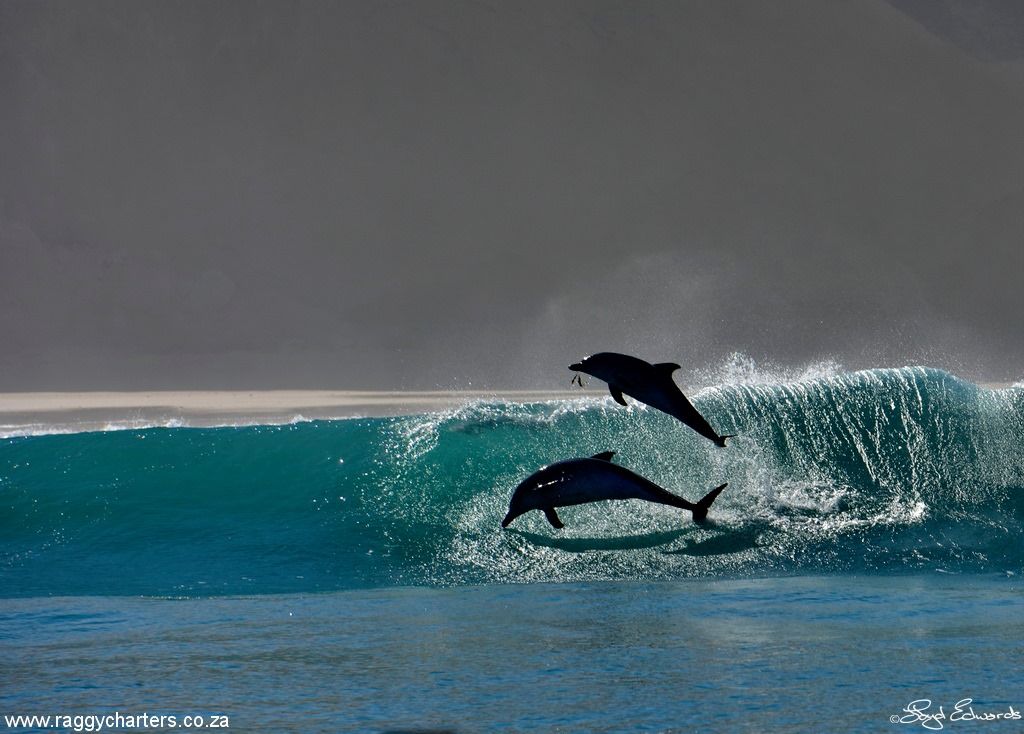 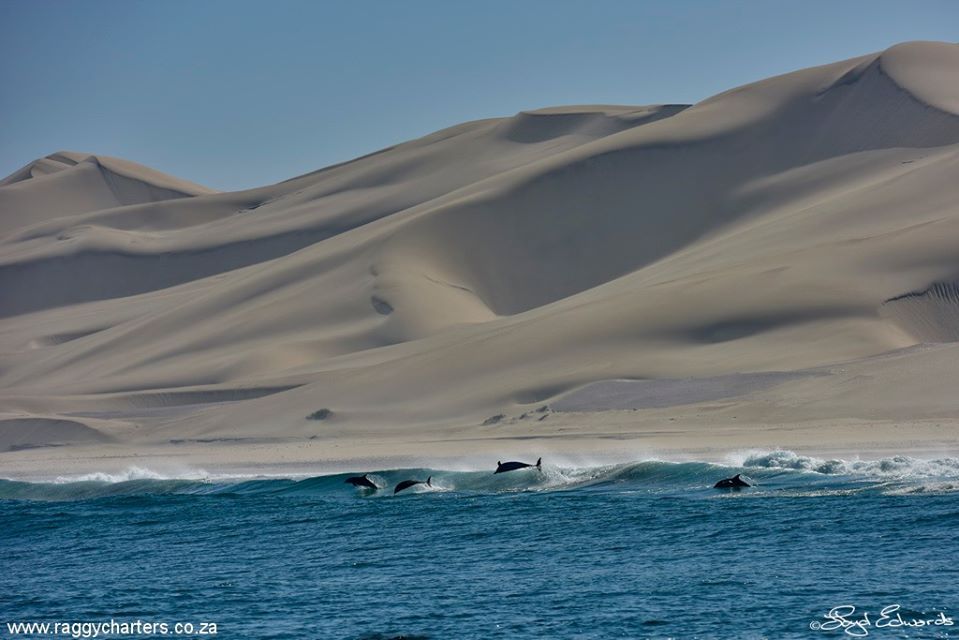